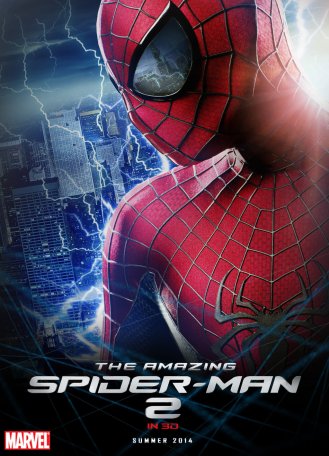 It’s not even mid-May and we’ve already got two superhero movies out in theaters, with more to come.  While Captain America: The Winter Soldier made record-breaking April box office numbers, The Amazing Spider-Man 2 recently opened and also topped the $90 million mark for its weekend debut.  Not too shabby.

Such an astronomical income may look, well, amazing.  But some entertainment pundits are asking, “Is it a success?”

Such a question is not so strange when comparing ticket sales among similar movies, including prequels and sequels.  Another item to consider is how much money it takes to make the movie (salaries, special effects, marketing, insurance, craft services, etc.).  Making 90 million bucks over a single weekend may not seem so spectacular when it reportedly cost triple that amount to make the film.

All this talk about multimillions may have you thinking about teacher paychecks, but that’s not the real purpose of this post.

Actually, the big question “What is success?” should be asked frequently in our schools and classrooms.

Recent results from the National Assessment of Educational Progress (NAEP)–also known as “the nation’s report card“–show that American students haven’t really increased their success rate in the past five years.  We’ve talked previously about how it’s important for teachers to closely review assessment data and speak out when and where they can (shameless plug).  But it’s also important to examine results and consider what is success.

The NAEP report finds that for U.S. high school seniors, less than 40% are proficient (or higher) in reading, and only one fourth (26%) are proficient or better in math.  Results also indicate that gaps in achievement among races/minorities are as wide as ever.

So many factors contribute to assessment results, more than we have time or space (or attention span) to discuss here.  But it is important to stop and determine our definition of success in schools. 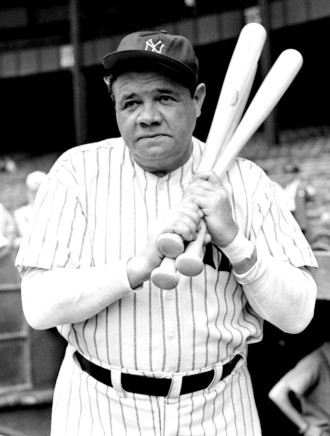 First off, it’s essential we not equate 100% with success.  Major League Baseball players are potential All-Stars if they get a hit one out of every three times at bats.  Babe Ruth’s career batting average was .342.  On the current list of active MLB players, the batting average leader is some guy named Joe Mauer, sitting at .322 (my apologies, Minnesota Twins fans).

I remember band directors telling us that we had to hit 100% of our musical notes during every performance, comparing our task with those slacker multimillionaires in ball caps.  Full disclosure: I never played every note perfectly during every concert.  Didn’t stop the audience from clapping.  And it didn’t stop me from playing.

Even Spider-Man himself didn’t win every comic book battle.  (It’d be boring if he did, wouldn’t it?)  According to Marvel’s own statistics, the webbed hero was victorious less than 60% of the time, just below villain Nightmare (59.4%) and above Iron Man (57.8%).  Check out the interactive and informative (and awesome) “Battle Breakdown” of Marvel Comics characters, courtesy of Wired magazine and author/designer Tim Leong.

(You should also check out Tim Leong’s website and Tumblr, along with his award-winning book Super Graphic: A Visual Guide to the Comic Book Universe, for some super-nifty graphical analyses of superhero stats.  Here’s a sample, this one a breakdown of primary colors among hero costumes: 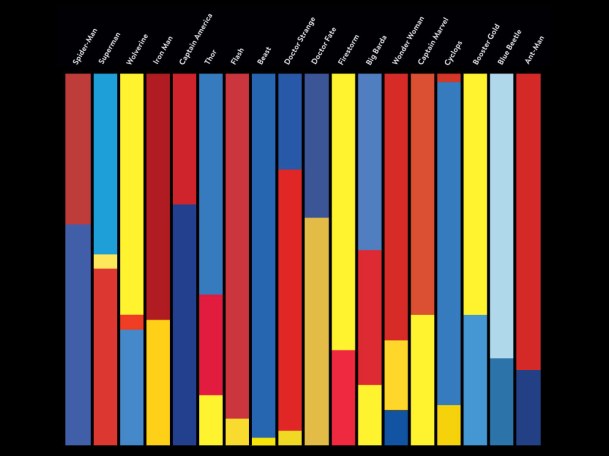 Interestingly, anti-hero The Punisher (as in “The Ohio State University”) has the highest winning percentage (86.9%, and only 2 ties) above all the other Marvel heroes.  This roster includes Captain America, Mr. Fantastic, the Hulk, Thor, Wolverine, and Daredevil. 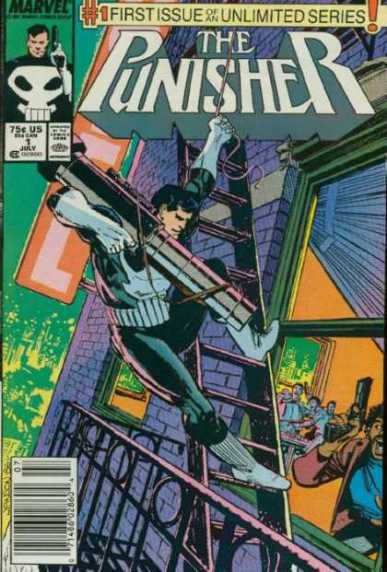 Winning Tip #1: Bring a bazooka to a gun fight.

Still, I think I’d rather be rescued by many other heroes before seeking The Punisher’s help.  It’s “Punisher” with a capital P, after all.  In his quest for vigilante justice, Frank Castle puts a permanent end to bad guys (i.e. dead), as opposed to more noble champions who abide to a higher moral code.  As teachers, we know that a little bit of mercy can go a long way.

So what is success in education?

According to the No Child Left Behind Act of 2001, the goal was for EVERY child to perform at grade level in reading and math by the year 2014.

Have we reached that level yet?  We only have half a year to go!

In one of my graduate classes, our instructor (a high school principal whose last name was Mann, so he was literally “Principal Mann!”) once told us the following with respect to student achievement:  “You can feed a donkey the best oats, give it the best trainer and exercise regimen, and hire the best jockey.  But when you race that animal in the Kentucky Derby, it’s still a donkey.”

Not every kid will be a straight-A student.  If they were, what’s so special about straight-As?  Success is different for each individual.

I remember sitting in one of my undergraduate science classes (astrophysics), and another professor had just posted grade results outside in the hall.  A mob of students clumped in front of the list, eager to learn the results.  Among the mumble and grumble, one jovial dude thunder clapped his hands and cheered, “D-plus!!!”

But that doesn’t mean we can’t push each other (and ourselves) to get better.

Another mentor of mine–Dr. Clough (rhymes with rough ‘n’ tough!)–used to say, “Aim for perfection, and you will reach excellence.”

Is that optimism?  Or realism?  Optirealism?

Let’s put aside our pessimism that some kids will just “never get it” and focus instead on what they can do.  The results may amaze you.

I’m optimistic that another Amazing Spider-Man sequel will show up in the coming years.  I’m optirealistic that it’ll be good.

2 thoughts on “What is Success?”