This month saw the release of a new comic from Marvel:  The Unstoppable Wasp, which stars a new Wasp heroine who is the teenage daughter of Hank Pym (original Ant-Man) and his late first wife.

The original Wasp, Janet van Dyne, is known as Hank Pym’s second wife and a founding Avenger.  In fact, she’s the one who named “The Avengers,” as seen at the end of issue #1 way back in 1963:

Janet is perhaps most famous for her colorful variety of costumes.  In fact, someone actually went to the trouble of cataloging all of Wasp’s outfits from the past 50+ years.  Here’s just a few:

Contrast the elder Wasp’s fashion sense above with younger Wasp’s mission, outlined in the comic panels below: 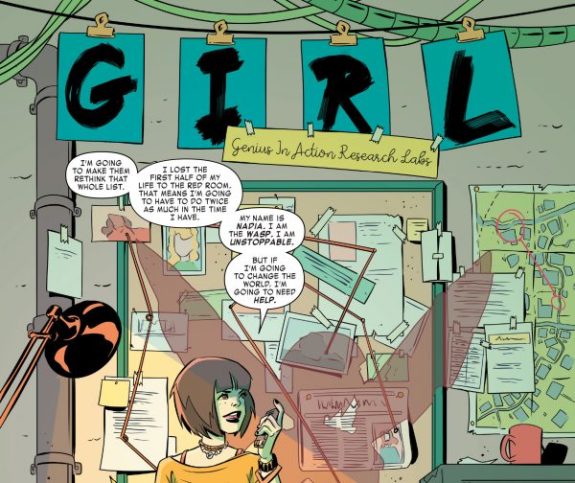 Reviewers are mostly positive toward Marvel’s new take on the Wasp and its pro-STEM  message, especially for girls.  Unstoppable Wasp #1 has been called “relentlessly positive” with “infectious enthusiasm.”  Take a look and consider for yourself:

I must admit, a mash-up of science, pop culture, and cheesy humor occurs in my classroom on a daily basis.  So of course I’m totally in favor of a comic like this.

And if you want more reasons for improving the gender balance in STEM-related work (science/technology/engineering/math) in the REAL world, take a look at some statistics here.

I’m not arguing that all students (male or female) should pursue STEM careers or college degrees.  But we do need students (and society) thoroughly educated in science and math, as well as ALL other disciplines.  Some folks add “Arts” to advocate for “STEAM” education.  I say throw in the Humanities, History, and Physical Education can call it “SHHTEAMPE” (Trademark 2017).

Maybe you haven’t heard of The Unstoppable Wasp, but you might know about the movie Hidden Figures.  This recent film (based on the book) shares the story of REAL women and their challenges and contributions.

Sadly, I haven’t seen this film yet. But it’s already one of my wife’s all-time favorite movies, so it’s only a matter of time.  Until then, Smithsonian Magazine‘s website provides an interesting overview, “The True Story of ‘Hidden Figures,’ the Forgotten Women Who Helped Win the Space Race.”

This feature also shares author Margot Lee Shetterly’s background (and ongoing) work in uncovering details about the people involved.  I appreciate the article’s final paragraph and quote from Shetterly, because it evokes super-heroics even as it emphasizes down-to-earth human effort:

“[Shetterly] hopes her work pays tribute to these women by bringing details of their life’s work to light. ‘Not just mythology but the actual facts,’ she says. ‘Because the facts are truly spectacular.'”

The impact of the people in Hidden Figures continues today, with reports about increased interest in STEM by girls and minorities.  I don’t know if The Unstoppable Wasp will have the same effect, but teachers may want to try both artistic resources in their classrooms.

Here are some other suggestions from “experts” talking with CNN about increasing girls’ interest in STEM.  I’d say that many of these ideas are applicable to all children and all subject disciplines.

What about you?  You don’t have to teach in a STEM-related field.  What “SHHTEAMPE” strategies do you use to make learning meaningful and memorable?