This post is different than most, pausing to honor the late, great, Stan “The Man” Lee.

I won’t even attempt to write a tribute to Stan Lee’s marvelous life and legacy, as several others have done a much better job.

For example, take a look Marvel’s website HERE, which includes this inspirational quote:

Also, many celebrities have written kind comments about Stan’s impact on their personal and professional lives. You can read several of them at https://www.rte.ie/entertainment/2018/1112/1010478-stan-lee-tributes/.

Even Netflix is honoring Stan Lee by encouraging viewers to use his catchphrase “Excelsior!” when searching for a show. Try it and see what happens. 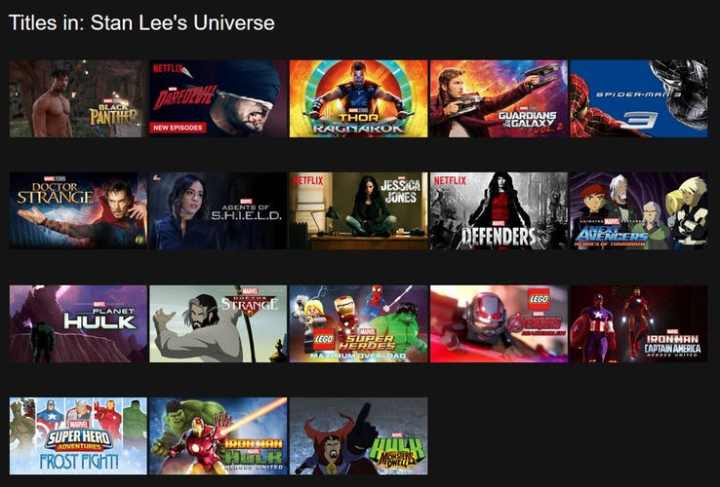 My way of thanking Stan “The Man” Lee is to consider all the lessons teachers can learn from his example. How can we bring these same traits to our schools and classrooms?

When I think of Stan Lee, the first thing that comes to mind is not the heroes and villains he helped create. Instead, it’s his overwhelming enthusiasm. Just take a look at this cover to his comic book-style autobiography: 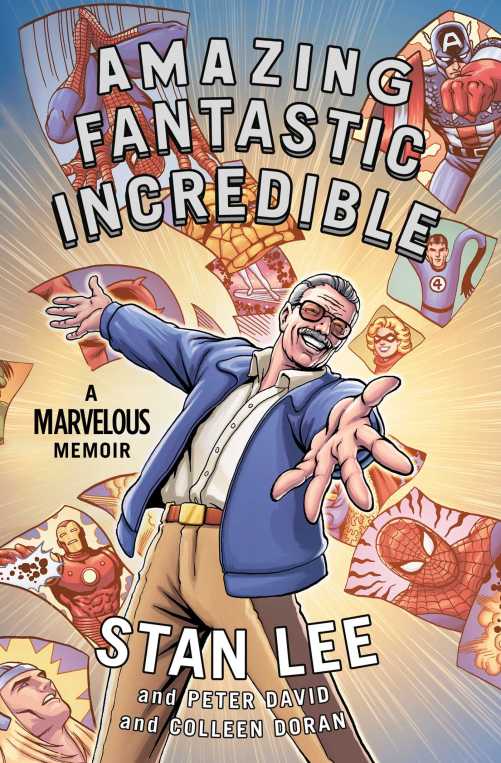 Or this real comic book featuring a real photo of Stan Lee: 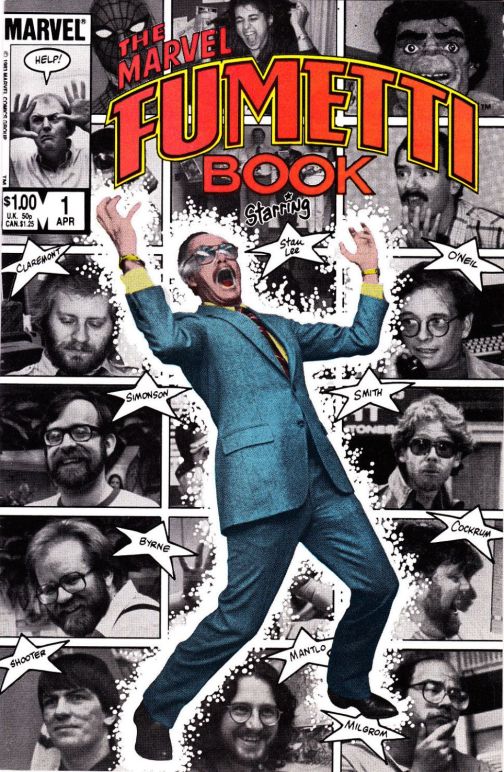 Although many people learned about Stan Lee through his various movie cameos, he actually had plenty of exposure first through comic book stories. Here is a neat article summarizing Stan’s various cameos through years of comic books. You’ll note a recurring theme of self-deprecating humor, fun, and energy. 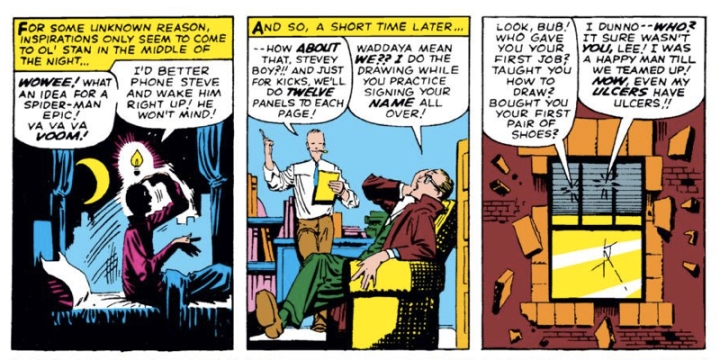 Much later, Stan made an appearance to narrate an entire issue of Generation X: 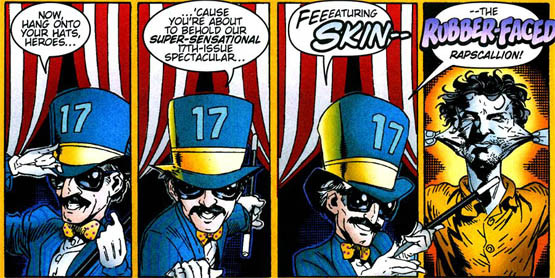 This stint prompted a company-wide event the next year, in which Stan appeared to introduce every Marvel comic book’s “flashback” story: 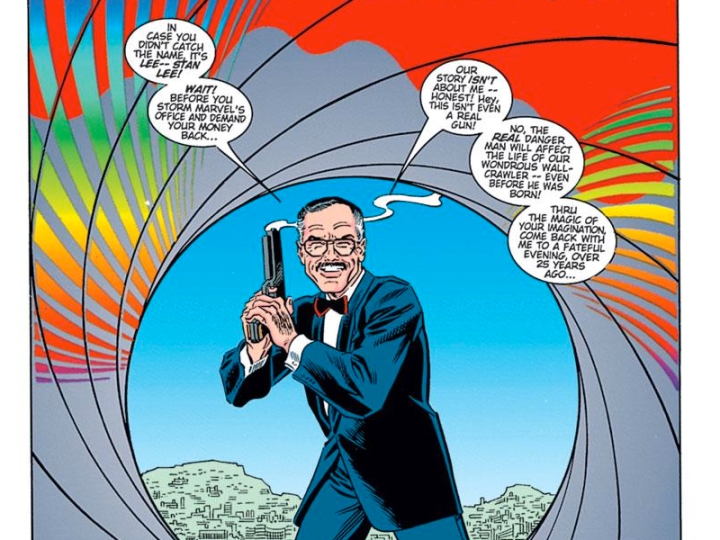 Stan Lee was an advocate for superheroes and their fans. Like the comic book example with Steve Ditko above, Stan introduced comic book readers to the creators and the creative process.

This was long before blogs and social media. Instead, Stan provided monthly updates in the comic books – Stan’s Soapbox, Bullpen Bulletins, and more. Moreover, he made it fun to be a fan. 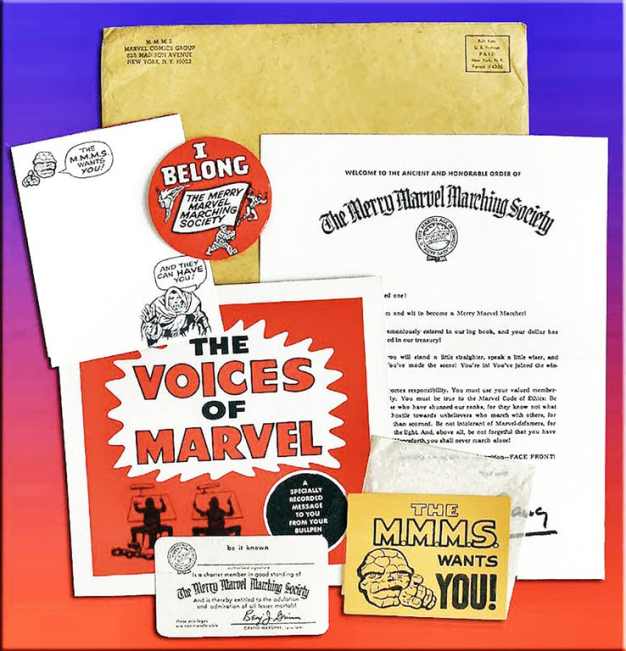 Brandon Zachary from Comic Book Resources wrote an essay, “How Stan Lee Created Comic Book Celebrity and Modern Geek Chic,” explaining “He became every reader’s ‘Uncle Stan,’ a sarcastic but kind figurehead of comics. Stan Lee helped mold the modern idea of Geek Chic into what it is today, and turned Marvel Comics from an entertainment company into its very own culture.”

Stan advocated for more than just superheroes and comics. As a writer and editor, he shared stories dealing with issues like alcohol and drug abuse, racism, hate, and more. Here are five of his “Soapbox” writings addressing such issues, including the one below from 1968:

One noteworthy issue of Amazing Spider-Man is #96 in May, 1971. This was the first comic book published by Marvel or DC to NOT have the seal of approval by the Comics Code Authority.  The “code” was used to ensure comic books were safe for young readers. But in Spider-Man #96, Stan Lee wanted to tackle the issue of drug abuse. 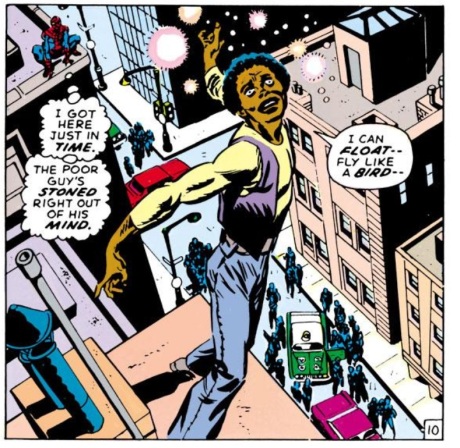 Forgoing the CCA’s seal of approval, Stan wrote and published the story. Soon after, the CCA updated its guidelines to consider depictions of controversial subject matter in individual stories.

Stan Lee is famous for pioneering the “Marvel Method” of making comics. Before this, writers scripted comic book stories with detailed descriptions and dialogue. To save time, Stan reduced the direction in his scripts and allowed the artists to decide things like page layout, number of panels, perspectives, etc. This created more trust with the artist, to the point where both writer and artist were credited as “co-plotters” in many comic book issues.

You can read more about this collaborative approach here, and hear Stan Lee describe the process himself in the following video:

Although Stan Lee frequently receives credit as creator of multiple Marvel heroes, he himself acknowledges the powerful role of co-creators and artists like Jack Kirby, Steve Ditko, Larry Lieber (Stan’s brother), and more.

Stan’s spirit of collaboration (and marketability) is perhaps what led to the “shared” universe approach in Marvel Comics. Readers could relish guest appearances, cameos, and team-ups among various superheroes and villains. Such crossovers are much celebrated (and copied) in the series of movies in the Marvel Cinematic Universe. 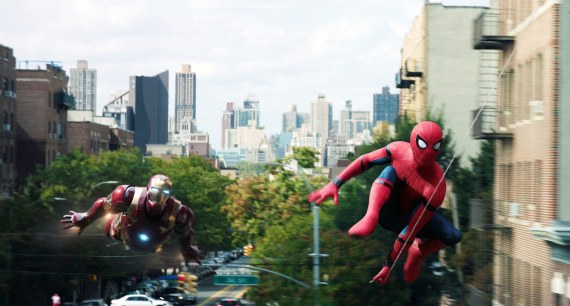 This is one of my favorite panels from Stan Lee’s memoir: 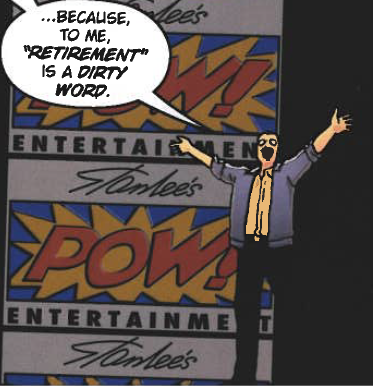 Stan Lee had worked in the comic book business for many years before he began his Marvelous run. This is a recent tweet from writer and reporter Brett White, reminding all of us it’s not too late to start something new: 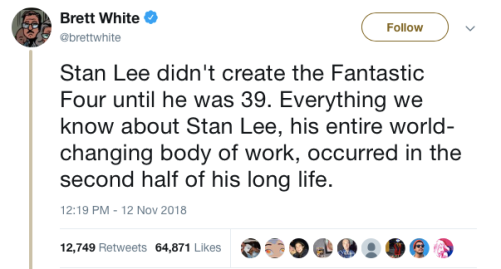 During my own lifetime, Stan Lee’s work was less in comic books and more in other media. He moved from New York to Los Angeles in 1981 to oversee television and film versions of Marvel characters.

Soon after came video games, including Spider-Man for Atari in 1983. How many 60-year-olds do you know would gleefully help like Stan in this Blip magazine feature? 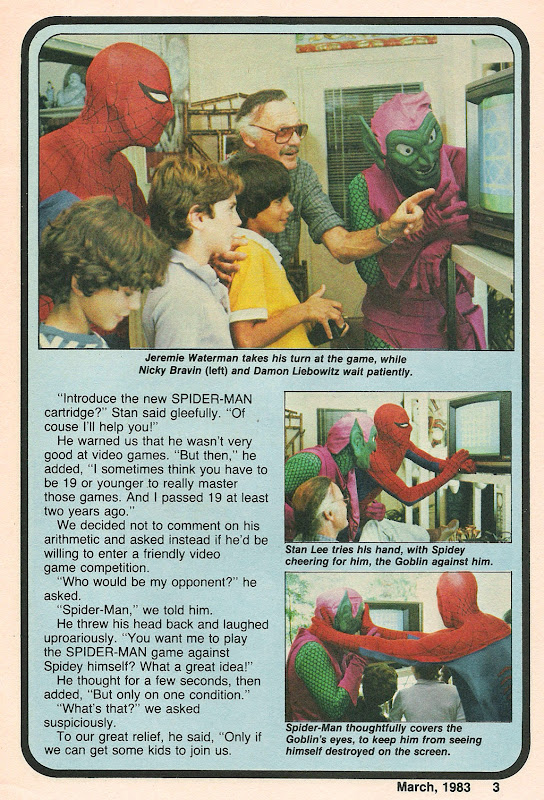 The first time I heard Stan Lee’s voice may have been in the PlayStation/N64 Spider-Man game, published in 2000. Even in his late 70s, Stan enthusiastically introduced “True Believers and Newcomers alike” into a “true superhero action thriller,” which you can enjoy here:

Stan Lee continued to try new things throughout his 80s and 90s. Some projects were more successful than others. Nevertheless, his work displays an energy envied by creators of all ages. 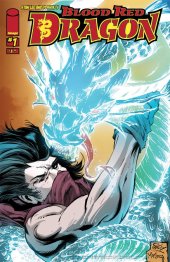 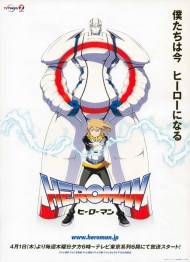 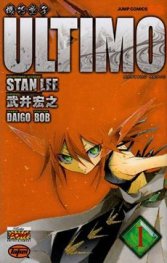 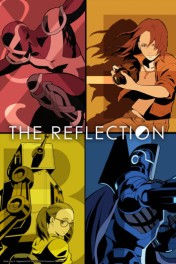 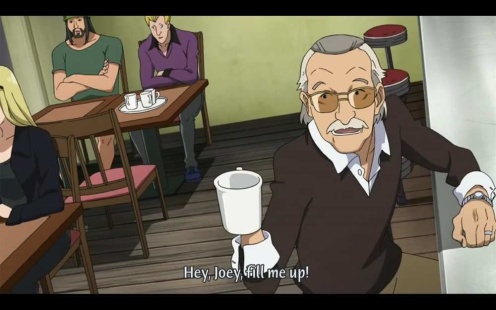 There will never be another Stan “The Man” Lee. But we can take inspiration from his enthusiasm, advocacy, collaboration, and lifelong learning. And we can remember Stan Lee’s example every time he pops up in a cameo.